Jump to content
Insights
During these 16 Days of Activism against Gender-based Violence, we shine a spotlight on how translation can serve as a way of empowering vulnerable people across the world, particularly women in situations of violence.

During these 16 Days of Activism against Gender-based Violence, we shine a spotlight on how translation can serve as a way of empowering vulnerable people across the world, particularly women in situations of violence.

What is the Campaign All About?

Sunday 25th November 2018 marked the International Day for the Elimination of Violence against Women, a date long observed by women’s rights activists since the 1960 state-ordered assassination of the Mirabal sisters, three political activists from the Dominican Republic. In 1999, the UN officially recognised 25th November as an annual opportunity to raise public consciousness about gender-based violence and campaign for its elimination from all spheres of society. In order to promote the day further, UN Women conceived the social mobilisation platform ‘Say No, UNiTE.’ It announced its 2018 theme to be ‘Orange the World: #HearMeToo’, which highlights the ideas of activism, advocacy, and continuation of the work of recent grassroots campaigns such as #MeToo, #TimesUp, #Niunamenos, and #NotOneMore. 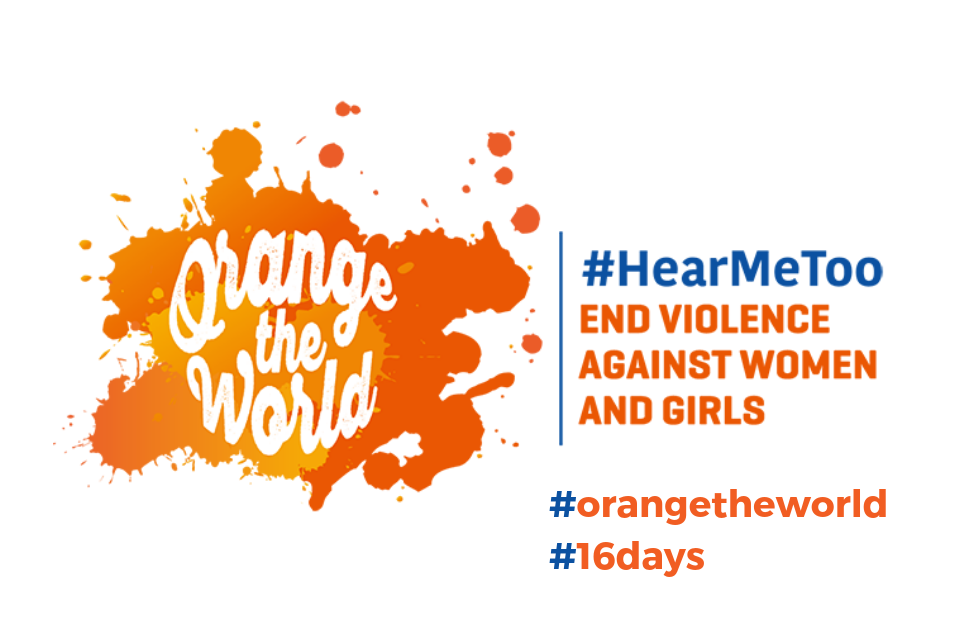 But the campaign isn’t confined to just one day. 25th November also kicks off 16 Days of Activism against Gender-based Violence, which runs until International Human Rights Day on 10th December. The campaign urges people and organisations across all sectors to engage in activism for 16 days, with the aim of sparking a dialogue about the global pandemic of gender-based violence. All forms of activism are encouraged: whether it's in-person, through organising events and outreach days, or online, through blogging, social media, and online petitions. To mark this campaign, let us share with you the indispensable yet often unsung role that translation can play in combating discrimination and violence against women and girls across the world.

Despite the increasingly globalised nature of our world, most of us English-speakers rarely encounter language barriers in our everyday lives. While online, Google has a habit of eagerly asking us if we’d like it to ‘automatically translate’ a web page before we have even set eyes on the original source language content, providing us with a clunky-but-functional translation instantaneously. When it comes to the arts, the bookworms among us may have read bestselling novels such as The Girl with the Dragon Tattoo, The Alchemist, or anything by Elena Ferrante without even thinking about the concept that they have been translated into English. Who could blame you, when the names of literary translators are usually absent from the book’s cover (and any place of note, for that matter)?

Books with the translator's name on the cover. I wish this was done more. #translatorvisibility @wordstodeeds pic.twitter.com/UxN9dbdUbC

For those of us living in the Western world where English is becoming the lingua franca, it would be easy to think that language barriers are disappearing. For many, though, this couldn’t be further from the truth. What about those who speak indigenous, regional, or minority languages and struggle to access basic public services, such as legal assistance, health care, and education in their own language—let alone enjoy translations of contemporary fiction? What about those who lack access to the technology that we take for granted, or non-profit organisations that require professional translation services, but do not have the funds to access them? Now consider the fact that many of these people may also be having to deal with poverty, illiteracy, and situations of violence. That language barrier suddenly becomes colossal.

What Role Can Translation Play?: #1 The Quipu Project

At its most basic level, translation is the act of communicating a message from one language to another. For many people, however, it represents so much more. This idea is no more evident than in the Quipu Project: an interactive documentary project which was set up to give a platform to marginalised communities in Peru which were affected by the sterilisation programme under President Alberto Fujimori in the 1990s. Over six years, Fujimori forcibly sterilised over 300,000 people, the vast majority being women from rural and indigenous communities. Many say they were coerced and did not consent to the operations, and thousands suffered painful medical complications as a result. The Quipu project is based on a free telephone line which allows survivors to call and share their experience of sterilisation. These stories, the majority recounted in languages like Quechua and Shipibo, are recorded, moderated, transcribed and translated into Quechua, Spanish, and English by a network of volunteers: professional, student, and beginner translators alike. The University of Michigan even set up a translate-a-thon to assist with the project.

The impact of translation in the Quipu Project is threefold. Firstly, translation represents a way to amplify the survivor’s voices and ensure that their messages have a wider, if not global, reach. Their testimonies are available to listen to anywhere in the world via the Project’s website, a particularly important detail given the struggle for acknowledgement and legal justice in Peru for these survivors. Secondly, the project allows the survivors to listen back to each other’s experiences and messages of support in their own languages, offering solidarity, comfort, recognition, and catharsis for many. Finally, this archive of translations has become an invaluable resource for International and Spanish-language organisations going forward in the fight for recognition and reparation. What Role Can Translation Play?: #2 Translators Without Borders

Translators without Borders (TWB) is a not-for-profit organisation that offers language, translation, and interpreting support to humanitarian agencies and not-for-profit organisations across the world. With the goal of addressing the language gap that can greatly hinder urgent and critical humanitarian efforts, their vision is to create “a world where knowledge knows no language barriers.” They have translated almost 80 million words to date.

Exploitation in the Aid Sector

Their recent work has centred on challenging sexual exploitation and abuse in the aid sector which, according to a report by MPs, is “predominately perpetrated against women and girls.” TWB has worked alongside the Inter-Agency Standing Committee (IASC) task team on simplifying the language of the six Protection from Sexual Exploitation and Abuse (PSEA) principles and translating them into over 60 languages, so that those receiving aid and the humanitarian staff alike can understand what is expected of them and the rules that must be complied with. Response to the Rohingya Refugee Crisis

TWB also works on creating glossaries, such as the new gender-focused language guidance launched this year as a response to the Rohingya refugee crisis. The glossary includes accurate translations of over 200 terms related to critical topics, such as gender-based violence (GBV), family planning, and women’s health, in five languages: English, Bangla, Chittagonian, Burmese, and Rohingya. This glossary became necessary for humanitarian workers due to the distinct ‘sociolect’ that Rohingya women have developed, often using euphemisms to discuss concepts that are considered taboo in their culture, such as rape, gender, and puberty. Furthermore, Rohingya has become one of the most marginalised languages in the world and lacks any kind of language guidance resources, making it difficult for humanitarian workers to assist the community in a meaningful way. Recent Oxfam research has affirmed that Rohingya women have been at greater risk of abuse and health problems than men. This gender-focused glossary is therefore aimed at supporting humanitarian staff and interpreters as they communicate with the community of Rohingya women: assisting them in discussing sensitive issues, helping them to access services and understand their rights and, most importantly, allowing the experiences of Rohingya women to be heard, understood, and given a platform.

This is the story of Tosmida's rape, a story she finds hard to tell herself. @TheEconomist helps us understand the complex emotional, linguistic, and cultural issues humanitarian interpreters must grasp: https://t.co/YljOuZcznH #RohingyaRefugees #AidWithDignity #LanguageMatters

During these 16 Days of Activism against Gender-based Violence, let’s show appreciation for the translators across the world that are using their skills for the benefit of those who really need it. Let’s acknowledge the many ways in which translation can be a tool for affecting positive social change. Let’s celebrate translation as a way to deliver critical information, amplify marginalised voices, and empower the vulnerable. #HearMeToo Wolfestone is a proud sponsor of Translators Without Borders, a sponsorship we are delighted to renew each year. https://translatorswithoutborders.org/ https://interactive.quipu-project.com/#/en/quipu/intro https://www.bbc.co.uk/news/uk-politics-45013078 https://www.oxfam.org.uk/media-centre/press-releases/2018/08/$72-million-needed-to-protect-rohingya-refugee-women-missing-out-on-vital-aid[/